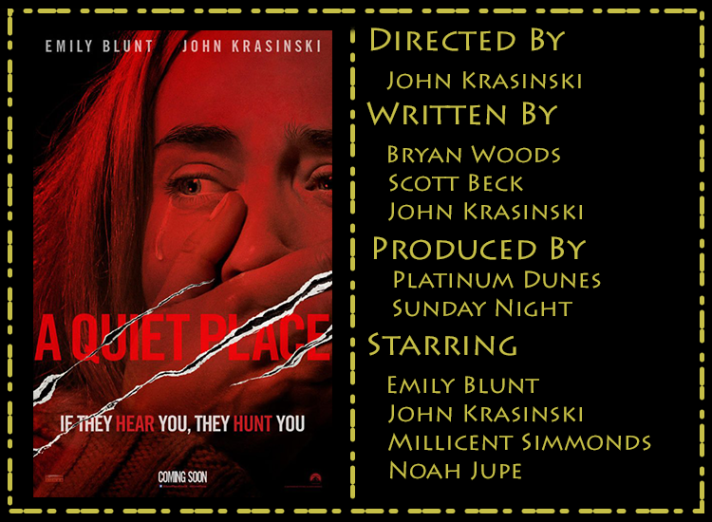 It’s very rare that a film will render me speechless on my way out of the cinema. I will often go see a film on my own so I may not have anyone to talk too, but I will mumble to myself or make a small sound of some kind as I’m exiting the cinema. Today I did not even consider doing that. I didn’t consider making a single sound as I made the walk out the door of the cinema, I willed myself not to make a sound because of this movie. This movie creates an atmosphere that will follow you outside of the cinema and that is one hell of a thing to pull off.

The film focuses on a family, while they are not named in the film they are credited as the Abbott family. We follow them as they try to survive in a world that has seemingly been over-run by something that will hunt you down if it hears you. You cannot make a single sound, not a peep. If they hear you, they will hunt you. If they hunt you, they will catch you. The bonds of this family are constantly being tested by the outside world that is making their lives a living nightmare. Throughout it all the parent’s, Evelyn (Played by Emily Blunt) and Lee (Played by John Krasinski) are doing everything that they possibly can to try and keep their children, Regan (Played by Millicent Simmonds) and Marcus (Played by Noah Jupe), as safe as possible.

Clearly, John Krasinski did his homework before directing this film because I have not seen a horror film that was this immaculately assembled since Get Out. Every single second of this film is so well thought out that it’s shocking that this is only his 3rd time in that director’s chair. The way that everything is framed is amazing, the performances he pulled out of his cast are spectacular. He clearly went and learned about Hitchcock’s method of tension building (Hitchcock said that in order to build suspense, you must show the audience the bomb under the table before it explodes) because he sets up so many amazing moments. The timing of each scare is immaculate, there aren’t any real jump scares in this film. It’s all just gradual tension building with absolutely perfect pay-off’s that work wonderfully. The building of tension is so intense and perfect that it caused me to learn how to chew popcorn with my tongue, in hopes to ensure I didn’t make a crunch sound and potentially kill everyone in the cinema. That’s how effective this film is.

The performances by each of the main cast are incredible. Every single one of them have to make you love their characters almost instantly without saying a single word… and they pull it off. Effortlessly. Emily Blunt is an absolute marvel, she has so many truly terrifying and powerful scenes and she makes every single one of them work. She instantly makes you aware of how warm and caring she is as a mother and how she want’s to try and give her kids a life outside of just surviving, she has so many little moments where she’s trying to make the best of this horrifying situation and it’s incredible. She has possibly the most horrific sequence in the film that requires her to basically be the most terrified she’s ever been in her life, and she does it without making a sound. Someone had better have prepared this for Oscar time, she better get some awards recognition for what she’s pulled off here.

To go back to praising John Krasinski, his performance absolutely washes away any image you ever had of him as Jim from The Office. He also has that warmth and love for his kids that Emily showed, but there is also this pure survivalist streak running through every single action. Everything he does is so clearly planned and thought out. When he uses sign language to communicate its blunt and sharp so you know he’s dead serious. You can tell this man will do literally anything to protect his family, even if that makes them hate him for doing it. There are so many sequences when you can just see how torn apart he is by this new world, how he’s clearly exhausted and scared but he has to keep it all bottled up to protect his kids. It’s a truly amazing performance that shows emphatically just how amazing Krasinski is as a performer.

Then we come to Millicent Simmonds in her second film role. Let me repeat that, in all caps, because I want it to sink in that THIS IS HER SECOND FILM ROLE!!! How has she not been signed up by some studio and given her choice of any film she want’s yet? How come she hasn’t been given her own TV series, another major movie, something, ANYTHING! She gives a performance that is beyond her years, beyond any child actor I’ve ever seen in my life. She has so many truly powerful scenes and she makes every single one of them jaw-droppingly amazing. She creates this strong slightly rebellious character who is battling with trauma from events early on in the film and a fear that her father doesn’t care for her. It’s a stunning performance that had better get her drowned in offers for film work because she has proven that she is a powerhouse and can clearly do anything she sets her mind to.

Finally, we have Noah Jupe, who I honestly didn’t realise was in the movie Wonder that I saw last year. I bring that up because it’s a testament to how much he dove into this character that I genuinely did not recognise him, he just became a whole new person and made a character that is insanely sweet and lovable, you want him to be protected. It’s actually a nice change for horror films to have the male child be the one who needs the most protection, he clearly is terrified of everything (As he should be) and has to be pushed into learning how to survive. His growth throughout the movie is truly incredible and makes you hope that he’ll be safe even when things are at their worst.

Just thinking about this film puts a smile on my face, this one is something special. Beyond the fact that it’s a horror film that’s almost entirely told with American Sign Language. Beyond the fact that one of its leads is deaf. Beyond its gimmick of no dialogue or its message of family being important… this film is just amazing. It’s truly something special that will be terrifying audiences for a while. I cannot wait to see just what Mr Krasinski terrifies us with next, but thank god for comedy actors who can also give us some of the best horror films that we’ve seen in years.

8 thoughts on “A Quiet Place”