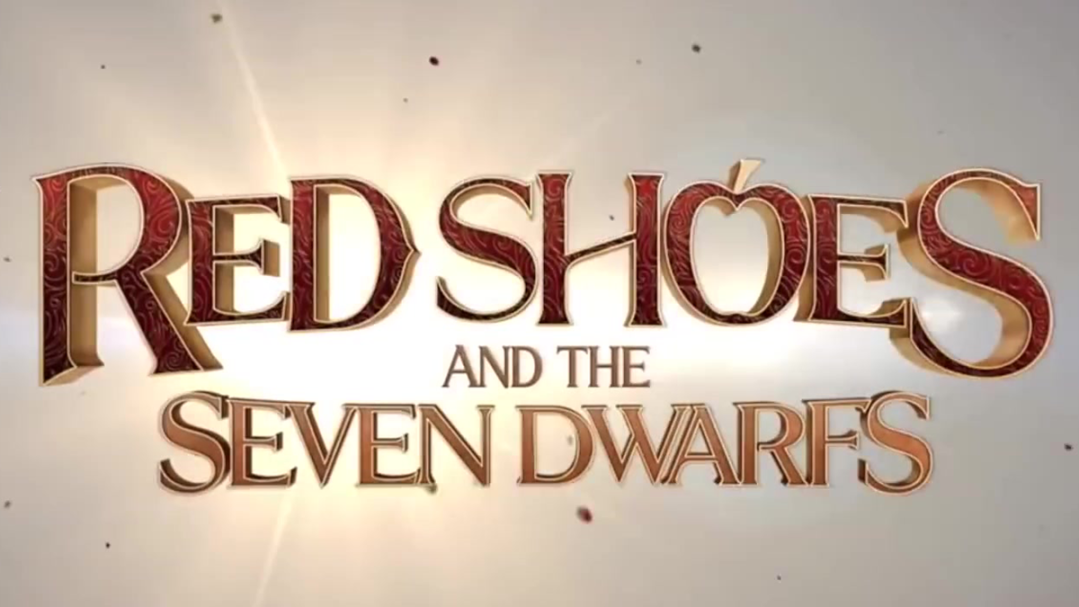 In 1937, Disney released what many regard as the definitive version of the German fairy tale Snow White And The Seven Dwarfs. It’s certainly the version that most of us think of when we talk about that legendary fable, to the point where the question “What are the names of the seven dwarfs” is answered with “Doc, Grumpy, Sleepy, Happy, Sneezy, Dopey and Bashful” instead of the names used in the original Grimm’s fairy tale. Do you even know what the dwarfs were named in the original Grimm’s fairy tale? Trick question, they didn’t have names and were referred to either as a collective or by “The first one, the second one, etc”. With Disney’s version looming large over the history of the story, every version since then has had to try and do something to make it stand apart from the most well-known iteration of this story. Red Shoes and the Seven Dwarfs decided to be confusingly boring, which is fun.

In general, Red Shoes and the Seven Dwarfs is a straight forward retelling of the Snow White story with a few key differences. First, all the dwarfs are actually super hot princes who look like they were rejected from a boyband but they accidentally pissed off a fairy and a curse was placed upon the super hot princes to turn them into ugly dwarfs that look more like goblins but they get called dwarfs because we need to make them fit the property we’re using. The Dwarfs names, by the way, are Merlin (Sam Claflin), Arthur (Simon Kassianides) … uh, I think one was named Jack (Frederik Hamel) and… uh…. 4 other ones (One of them voiced by Nolan North and the other three voiced by Frank Todaro). The only dwarf you’re really meant to care about is Merlin, who also knows magic because of course he does and will be the main love interest for our main heroine.

Snow White (Chloë Grace Moretz) is a fat girl who no one loves until she puts on a pair of magical red shoes that’re made from a magic apple. Those red shoes turn her into a thin attractive person and, therefore, the story can happen because she’s worthy of being approached by the horny prince dwarfs. She has no actual personality beyond this, she just looks pretty until she takes her shoes off and spends the film hunting for her father while avoiding the wicked witch of this film. The witches name is Regina (Gina Gershon) and she has a seemingly endless supply of magic apples that can turn people into giant tree monsters or just into trees with faces on them. There is no reasoning why this is a thing, none of the apples look different, apples are just weird that way.

Throughout the ‘film’ Red Shoes (which is literally what they repeatedly call Snow White, because why not reduce the main female character down to her footwear) is trying to find her father, who has been missing for some time, and ends up getting help from the dwarfs. The dwarfs, meanwhile, are trying to get Red Shoes to kiss one of them to break the spell and it seems the only one who might be able to do this is the one who has the voice of the hot guy from the Hunger Games movies. The entire film basically revolves around this need to get those two to kiss, only stopping occasionally to bring in a strange giant bunny made of wood or references to Arthurian legend because why not throw some of that into this story.

The film claims to be trying to do a story about how true beauty lies within which is a great message, it was done in Shrek which is a big influence on this film, but in this film they do it poorly. Think about the difference between the Dwarfs and Red Shoes. The Dwarfs are attractive men who get turned into goblin-like creatures with green skin who look notably monstrous… Red Shoes is fat and she becomes not fat when wearing heels. Anyone else think there’s a little bit of a disparity there? Anyone else find it a little annoying that “Fat” is comparable to “Short goblin with green skin”? Because it’s exactly as bullshit as you’d think it would be, right down to scenes where the dwarfs don’t recognise Red Shoes when she’s fat despite her wearing the same clothes, having the same facial features, having the same voice and calling out their names! It’s… it’s not good, the implications are exactly as horrible as you think they would be.

What makes this entire thing worse is the lack of actual good jokes in the film. I’m not even sure they were trying to make jokes half the time, it was just such a boring film that I almost fell asleep several times during it because nothing interesting seemed to be happening… and you’ve read up to this point and read the bullshit that was in this film, I shouldn’t have been bored by this much condensed stupidity and yet I was. The only time I laughed was during the end credits when they had drawings of what happened after the story and showed one of the other dwarfs serving a fish dinner to The Little Mermaid. When your only noticeable joke happens during the end credits, that’s a problem.

This film just isn’t that good. It’s not funny, barely interesting and at best offers some decent visuals that might distract a few kids but… I mean, right now you have access to the entire Pixar library with a few clicks of a mouse. You could just show your children the original Snow White and they’d get a lot more out of it. This is just barely watchable, and that’s being kind.