In 1993 the comic book artist Mike Mignola created the character of Hellboy for Dark Horse comics. A demon-human hybrid, the character became a big enough hit with readers to get an adaptation in 2004 with the movie Hellboy that was written and directed by Guillermo del Toro who managed to turn it into a minor box office hit, pulling in almost 100 million worldwide on a 66 million budget. It got enough critical praise and a cult following to get Universal to shell out for a sequel with the same cast and same creative team, 4 years later letting out Hellboy 2: The Golden Army which fared even better, netting almost 160 million on an 85 million budget and (at least as far as I’m concerned) was just a better movie all around. Now it’s a decade later and rebooting old franchises is all the rage, and Guillermo Del Toro is coming off of two Oscar wins for his beloved film The Shape of Water so now would be the perfect time to get him to come back, drag Ron Perlman with him to don the red latex again and knock everyone out with an amazing Hellboy movie… or you could just get a bunch of completely different people to try and make money off the name alone and hope to god no one actually cares about being entertained, that’s a valid option. 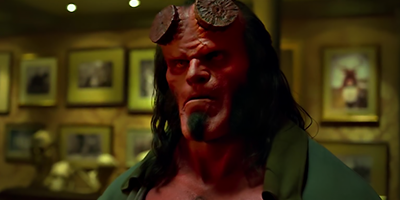 Hellboy is a complete reboot of the series, so much so that it starts in King Arthur times (NEVER A GOOD SIGN!) where King Arthur and his knights stand against the Blood Queen (Milla Jovovich), a sorceress who plans on unleashing a plague upon the world (a plague that seems to be more about insects than blood but that’s the least of the problems) but she’s stopped when King Arthur cuts her up into several large pieces that are easy to sew together, locks those pieces in very smashable boxes and puts those boxes in very easily invaded churches. Jump to modern day and Hellboy (David Harbour) is enjoying his life in an R rated movie where he can say fuck and bitch and cock all he wants without having to do anything resembling ‘being an interesting character’ or ‘being worth the time it took to write this comedic description of him’. Basically, he’s trying to behave like a teenager but it just comes off as irritating, especially any time he interacts with his adoptive father Trevor (Ian McShane) who is there to do the exact things you hire Ian McShane to do. So anyway, in modern day a magical hog-fairy called Gruagach decides to resurrect the blood queen by finding her easily findable body parts and putting her together so that she can give him power so he can get revenge on Hellboy because Hellboy hurt him with iron when Gruagach tried to take the place of a baby called Alice (Sasha Lane) and I swear to god I didn’t make a word of that up. In fact, I left a fair amount out like the stuff about the Nazi’s, Lobster Johnson, the witch with one eye, the were-jaguar and so much more completely pointless bullcrap that I can’t even begin to fathom how they fit it all into 2 hours… oh right, badly. 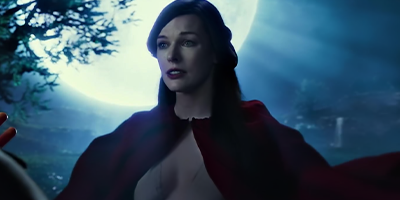 To try and properly explain how boring this film is, there is a moment where Hellboy turns into basically the devil, holding King Arthur’s sword that’s on fire while staring down an immortal plague queen… and I yawned. It was boring, you have the most awesome combination of ideas there and it’s boring. The entire film is boring, even though it’s trying really hard to be so cool because they’re throwing around the red stuff and the obscenities like it’s nothing else. The problem is that none of it lands and can even feel gratuitous at times. I’ve got nothing against spraying around a bunch of blood in a movie, hell I’ve complained when movie’s don’t do it enough, but this one almost felt like they were doing it desperately to try and get noticed among a sea of superhero films or to stand out from the original and it just never worked, not helped by the fact that the CGI blood used was often pretty bad. In fact, a lot of the CGI work stood out, and not just because they were creating creatures with it. We’re talking issues with blending, blood and gore, just a lot of moments that felt really poor when it came to effects.

It sucks that the film is so boring and try hard because the cast is actually quite good. David Harbour had the thankless task of taking on the role that Ron Pearlman got perfectly the first time and while David’s been given a character that is much less likable, he plays him well. Ian McShane is physically incapable of being anything less than amazing. Milla Jovovich plays a fun villain, albeit one who looks completely human which is weird for a character who is there to be referred to as the mother of the monsters and whose entire plot revolves around the idea that she doesn’t fit in with the humans when she could literally just walk into town and go see a show on the West End without anyone calling her out. She’s claiming a problem that she doesn’t have, it’s kind of irritating. What’s also irritating is that Sasha Lane, who plays Alice, is a great actress and I’m sure I’d enjoy her in other things but this is not one of those things because I do not know what her character is. It just seems like she’s a MacGuffin of a character who is there to help allow dead people to give exposition when needed and to be cool and hip because this movie desperately wants to be cool and/or hip. Lastly Daniel Dae Kim plays a character who turns into a Jaguar, his casting is interesting because it was a notable story when a white actor was cast in the role of a character that was Asian in the comics and that actor quit so Dae Kim could get the role, a rare case where whitewashing was nipped in the bud… and that short story is more interesting than the character who basically is there to be constantly irritated by Hellboy daring to exist and to turn into a CGI Jaguar when the time comes for that big shocking moment that isn’t shocking at all because they telegraph it so much that you know he’s turning into something from the second you see his face.

The movie is more bloated than anything I’ve seen lately, slipping away from the central story on a whim in order to do side quests with Merlin or with the woman with one eye (who isn’t brought up again, unless she’s in some end credits scene that I missed because I walked out before the credits ended because I was bored and wanted to go home) and never seeming to focus on the actual main story. We have a magical nearly naked witch sending a plague to destroy mankind one by one; do we want to deal with this? No? No, we’re going to spend a couple of minutes on a pointless detour that goes nowhere and could’ve been completely edited out without anything of value being lost? OK, let’s do that instead. It’s so desperate to seem grand that it ends up undercutting itself at every possible turn, building up momentum and showing off some potentially cool things, only to cut away for meaningless crap.

Hellboy is not the worst movie of the year, far from it. To people who haven’t seen the first two movies and just want a few hours of mindless entertainment, I can assure you this is about as mindless as you will get. However, it’s also ill-conceived and tries too damn hard to be cool, making it circle back around to being one of the lamest films of the year. Maybe next time when you have a chance to make a film with Guillermo Del Toro, you’ll just give him the money and let him make a film that people will actually end up enjoying. Just a thought.