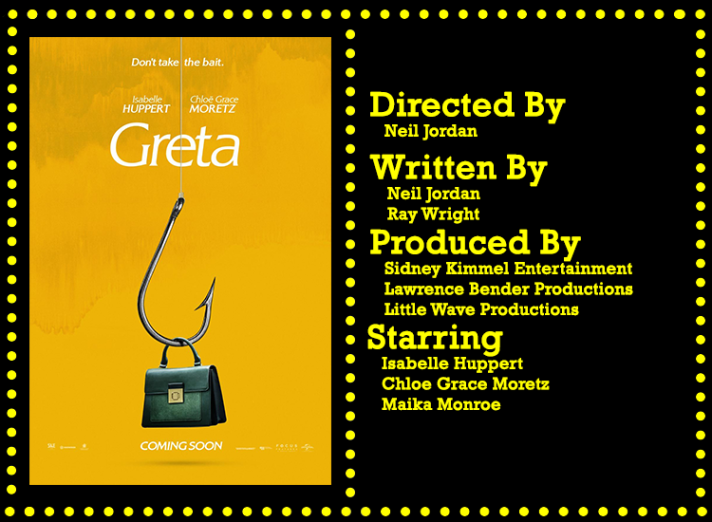 One of my favourite films of all time is Fatal Attraction. The tale of a woman obsessing over a man who she has an affair with created one of the tensest motion pictures that I’ve ever experienced. It’s the film that I believe Glenn Close deserved an Oscar for and it’s a story archetype that I’ve grown interested in. Tales of obsession slowly turning into something terrifying will always get my attention, so when I heard that there was a new thriller out there that tried to handle the idea of obsession I was intrigued and hopeful that I might find something to join Fatal Attraction in my list of great thrillers and while Greta might not be as great as Fatal Attraction, it’s pretty damn awesome.

Greta starts by following a young waitress named Frances (Chloe Grace Moretz) who is living in New York with her friend Erica (Maika Monroe). She works as a high-end restaurant in town and one night on the way home, she spots a handbag on the subway. Being the Good Samaritan, Frances looks up the owner and returns the bag to Greta Hideg (Isabelle Huppert) the next day. After a long conversation, Greta and Frances decide to exchange numbers and spend a little more time together and start to become friends… right until Frances opens a closet and finds several handbags identical to the one that she found. Realising that Greta might be dangerous, Frances tries to cut Greta out but, to paraphrase Alex Forrest, Greta’s not going to be ignored.

To be honest, this film really does seem like it goes through the checklist of what a film needs to do when it’s telling this kind of story. Everything from police not listening, public confrontation, the victim investigating the stalker, a lot of things that we’ve seen before in this kind of film pop up throughout Greta. It has a huge chance of becoming repetitive and one-note, but thanks to the incredible performances by Chloe Moretz and Isabelle Huppert it manages to work. Chloe created one of the most engaging leads, someone who you find yourself rooting for and really wanting her to get out of this insane situation alive. She has so many great moments in the film, particularly when she has to show strength and fear at the same time. The scene where Greta turns up to the restaurant is a brilliant moment for Chloe as an actress and she would be the highlight of the film… but Isabelle Huppert exists. 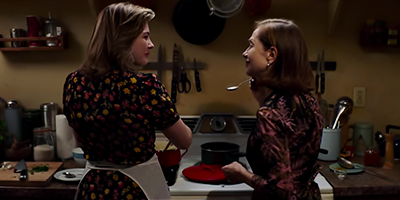 Isabelle Huppert turned up to set, looked at the scenery and decided to start taking slow methodical bites of every bit of scenery she could get and chewed it all up. Her performance is brilliantly over the top, to the point where she can border on a cartoon in some scenes but the amazing thing is that she feels real. Greta is a gloriously complex character who is desperate to have someone to talk to, but also willing to kill anyone who gets between her and whoever she wants to be with. She’s delusional and methodical and it’s a fascinating performance. She will do something horrible to someone and then dance away to Chopin and it is brilliant. The film rests completely on this one performance and it makes everything worth watching. 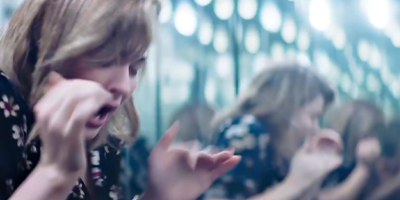 Even though this film has a lot of things that feel like they’ve been done before, there is something to be said for going through a checklist and doing it perfectly. The tension builds brilliantly, creating a level of paranoia that not only affects Frances but will get to the audience. There were countless times I caught myself looking in the background to see if maybe Greta was hiding there, you expect her to pop up at every turn. It’s the kind of performance that should go down in history as one of the great villain performances because Isabelle goes at it full throttle and gets so much great mileage out of material that could have, in the hands of anyone else, come across as silly.

Greta is a good fun film that leans heavily on its lead performers to carry it through. While it is just going through a checklist, to the point where you can almost predict how everything’s going to go, it goes through that list perfectly and hits every note in just the right way in order to get the desired effect. It might not go down as one of the memorable greats, it might not even linger in the cultural memory that long, but it does create a good enjoyable thrill ride that is really enjoyable.