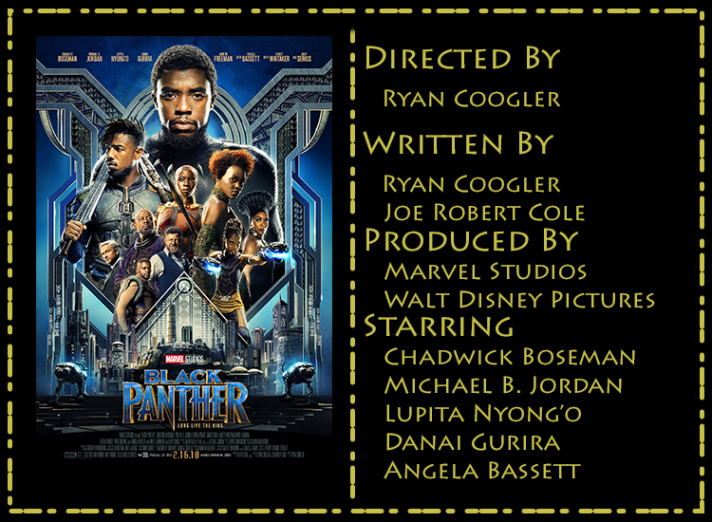 Before I begin I must state this explicitly as I can. I cannot begin to express what this film must mean to the black community, I wouldn’t even dare try. I implore you to go out and find black voices who are talking about this film and what it means to them because this film is proudly of that community and I, a white gay male, have no way of truly understanding the importance of this film in that context. I can only give my feelings on this as a film and not a cultural milestone to a community of people (Even though it absolutely is, let’s all just admit that now because it’s a literal fact). So, what follows is the opinion of one white man about the movie Black Panther. If you don’t want to hear some white boys opinions on the film, I completely understand that because this film should be talked about by people other than me… but I have a review blog and saw a movie, so this is where we are. Just wanted to state that up front and get it out of the way, let’s do this

Black Panther follows Prince T’Challa (Played by Chadwick Boseman) shortly after the events of Captain America: Civil War when he must fight to maintain the throne of Wakanda and be king of his homeland. While he is trying to rule in a way that will make his ancestors proud, over in England a man named Erik Killmonger (played by Michael B. Jordan) steals some vibranium from a museum with help from his henchmen, including Ulysses Klaue (Played by Andy Serkis), and plans on getting to Wakanda himself so he can overtake T’Challa on the throne since he blames T’Challa and his father T’Chaka (Played by John Kani) for how his life has turned out.

So…this is probably the greatest film Marvel has produced so far, and I’m including The Avenger’s films in my rankings when I make that statement

Black Panther feels almost Shakespearian in its tale of one man fighting to win his throne back and the other man fighting to free his people, no matter the cost. It’s a story that actually allows you to not only understand the antagonist’s point of view which is very hard to pull off in a superhero film. Normally in a superhero film, the villain is a caricature of evil to such extremes that it’s impossible to understand his motives but to many people, Killmonger wouldn’t be a villain. I only call him that cos he’s fighting the hero of the film and in a dichotomy of character roles, if you’re the direct opposition to the hero then you’re considered the villain. Even still, I could easily see this film retold from his perspective where he’s the hero who no one listens to and that’s fascinating, to see that kind of character in a film like this is special because so often an antagonist is just pure evil with no real reason to even think about things from their side but here? Here we have a character who you can absolutely understand his reasoning, even if his methods leave much to be desired. Speaking of characters

Chadwick Boseman as the lead is every bit as charming and engaging as he was when we first met him in Captain America. He carries the film effortlessly, providing this film with a powerful lead performance that holds everything together. He’s funny when he needs to be, intense when required and you can see his growing conflict with just a simple look from Chadwick and it’s incredible.

To the shock of literally no one, Michael B. Jordan plays a formidable villain in this movie. Marvel movie villains have a tendency to be fairly hit or miss but this is a solid hit. He’s not only intimidating, he’s relatable. His backstory is emotional and provides a solid backbone for this story. This isn’t a film about some crazy alien trying to take over the universe, it’s a tale of two men who could’ve been anything and the circumstances they were born into have shaped the men they turned out to be.

The female cast in this movie is of particular note because they probably do more impressive action scenes than the men do. Okoye might be the most badass female character that I’ve ever seen and Danai Gurira plays her to perfection. She’s fearless and formidable, the image of this powerful black woman in a flowing red outfit with a spear in one hand as she rides the top of a car is the kind of iconic imagery that a character can only dream of getting. Then there’s Nakia, a spy for Wakanda who fights to free enslaved women, it’s a role that reminds you “Oh, THAT’S why Lupita Nyong’o is a goddamn Oscar winner. Because she’s amazing”. Her character has some of the most amazing fight sequences and again, iconic imagery litters the film every time she turns up. Shuri is the kind of female character who young women deserve to have as role models in films, sorry it took so long for Hollywood to put her in one because she’s amazing. Letitia Wright fills her with such charm and innocence, while also making it very clear just with a look that she’s smarter than everyone in the room and they all know it. I could literally go throughout every woman and man in the cast and praise them all, from Angela Bassett to Daniel Kaluuya, every last performer brings something special to the roles that make them soar.

On top of just having some of the best performances that one could hope for in a mainstream superhero movie, this film is visually stunning. The set design, the costumes, the wigs, the makeup, there is not a single thing about the look of this film that isn’t perfect. Wakanda looks like an absolutely heavenly place that anyone would be gleeful to live in. I swear if this film isn’t submitted for best costumes at next years Oscars, I may personally start a riot because they are everything. It’s weird to get so excited about costumes but these ones are perfection and they all stand out for each character, you could tell what tribe is what just based on the colour palette chosen for their garments.

This is Ryan Coogler’s third feature film. His first two are considered among the best of the 2010s and this one is going to be in the history books. If this is what he pulls off as a 3rd film, I’m excited to see what he does with his 30th. I can’t wait to see what else he has in him, I’m already looking forward to his next film Wrong Answer (Going by IMDB here) cos with him at the helm, I know it’ll be something special. Seriously, Memo to the Academy Awards, you might want to carve his name into a statue now because this man is going to be taking one of them very soon and you might want to have it ready for him when he comes to collect what he rightfully deserves

Every element of this film is perfection. It’s thrilling but it’s emotional, heartbreaking and hilarious all in the same scenes. It pulls off imagery that is beautiful and propels the story of the film forward. I can’t imagine any other movie for this character, Black Panther set out to be the perfect movie for the king of Wakanda and they ended up just making the perfect movie. #WakandaForever

Oh, and there are 2 end credit sequences and both are important to the arching story of the Marvel Cinematic Universe so stick around for them… though I shouldn’t need to tell you that, we’ve done this for a decade now so at what point do we all learn to wait until the movie is completely over before heading out?