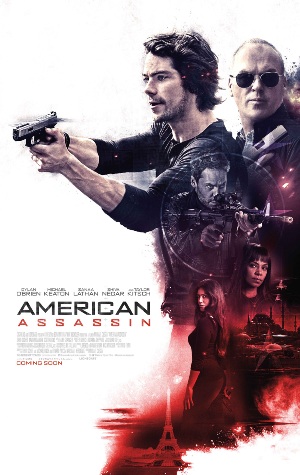 American Assassin is based on the novel of the same name by Vince Flynn and centers around Mitch Rapp (Played by Dylan O’Brien), a young man whose girlfriend is murdered by a bunch of Islamic terrorists and so he decides to go try and kill them all. In one of his little vigilante sessions, he get’s dragged into the CIA and is mentored by Stan Hurley (Played by Michael Keaton) who ends up having to bring Rapp with him to try and stop a nuclear bomb falling into the wrong hands.

For the most part, the cast in this is good. Michael Keaton basically owns the screen anytime there’s a camera pointed in his general direction so that’s not a shock to anyone, it was pretty surprising seeing Dylan O’Brien playing this tough character when I have kinda gotten used to him as the goofball on Teen Wolf. He definitely sells his character for the most part. I also really liked Sanaa Lathan as Irene Kennedy, basically their boss. Other than that though there really aren’t any characters you can latch onto and care about, at least I wasn’t able too.

The action setpieces were pretty good, nothing spectacular but they provided a good amount of tension and built when they needed too. There were some that just seemed a bit pointless, especially one towards the end that doesn’t really make that much sense but for the most part they were OK.

I did have a really big problem with how they handled Mitch’s story. He starts the movie wanting to get revenge for the death of his girlfriend… he might be waiting a while because that plotline is gone by the halfway point, it’s ignored in favor of “Someone stole nuclear crap from the russians and is selling it to Iran, also that someone might be one of Stan’s former students” and that’s just annoying. The villains motivation can be summarised with a Taylor Swift lyric… “Look what you made me do”.

Also, Scriptwriters everywhere please heed my call… If you have to have someone on camera point out that they are repeating information or say anything that’s even a freaking simile of “As you know”, stop. Burn that page. Start again. There are a few moments right up the top where they are pointedly having characters repeat information that has clearly already been told to those same people just for the benefit of the audience.

Oh, and considering how many times Mitch Rapp defies orders which get’s people killed, someone wanna explain to me why he isn’t shipped off home? Because he’s the main character? I mean, that’s the only reason, such a pity that human beings don’t actually act like that.

In general the film is a low risk/low reward action thriller with a few good scenes and some pretty good performances by the two male leads that try so hard to carry the film and take it to another level but honestly, they just barely get it over “Adequate”

One thought on “American Assassin”