So, I’m not exactly a theme park enthusiast. I’ve tried to go to them before and never really enjoyed them. Maybe it’s the people, maybe it’s the food, maybe it’s the weight restrictions that basically tether my feet to the ground that I don’t want to walk on for four hours for three rides, I’ve just never been big on them. However, films about theme park rides? I… don’t care for those either, but only because they’ve never actually been good. With the notable exception of the Pirates of the Caribbean movie, a film based on a theme park never seems to work and only seems to irritate the audience that goes to see it. When a film was announced to be about a girl who builds a magical theme park, I was ready to be annoyed and irritated by it. I was prepared for it to be Emoji Movie level trash. I was ready to sit down and write almost 2000 words about why it was an abhorrent piece of cinematic sludge that will poison your children’s minds and render them mute with its awfulness… but that implies that what I saw had something in it that was interesting enough to elicit that reaction from me and the only reaction I really have is “Oh, that exists”. 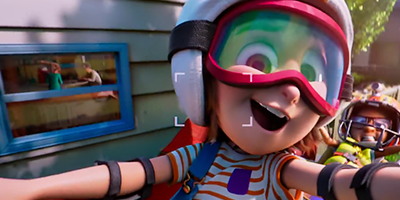 Wonder Park is about June Bailey (Brianna Denski), a young girl who creates a magical theme park in her imagination called Wonderland with the help of her mother (Jennifer Garner). One day, June’s mother gets sick with “We don’t want to keep the mother in this movie” disease and she goes off to the hospital in order to get better off-screen. This sends June into a depression, culminating in her putting Wonderland away and apparently becoming overly attentive to her father (For like, one scene in order to further the plot because they forgot to make this a thing she did). On her way to math camp, where they sing songs about pie and make awful puns about being on the rhombus (wrong bus… get it? LAUGH DAMNIT!). She escapes the math camp and tried to return home and stumbles upon the actual Wonderland which has now been overrun by Chimpanzombies where she must try and save the park with the help of Boomer (Ken Hudson Campbell), a large blue bear who has narcolepsy because that’s a hilarious joke. Greta (Mila Kunis), a boar who tries to hold everything together and is also there to basically be the romantic interest of Steve (John Oliver), a porcupine that also happens to be the safety officer. Gus (Ryan Fitzgerald) and Cooper (Wippa) are a pair of beavers who run around and do comical things that are allegedly comedic. Finally, there’s Peanut (Norbert Leo Butz), a chimpanzee who does the ride creation and doesn’t turn up in most of the film. Together this ragtag group of assorted character traits must fight together to stop the darkness from taking over the park… I guess? I mean, I had to look up Wikipedia for the details of the plot because the movie itself isn’t memorable enough for me to detail that much of the plot roughly an hour after I saw it. 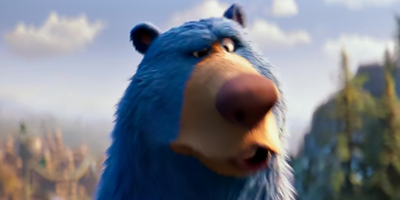 Before we detail the problems that are on screen, some of you might read through that cast list and think I’ve made a mistake. I promise I haven’t because this film re-recorded the characters of Gus and Cooper and replaced the famous actors (Kenan Thompson and Ken Jeong) with local “celebrities” Fitz and Wipper for the Australian version. I put that in quotes because I promise you, those two are not even close to big names unless you listen to morning radio. The beavers also have different voice actors in the UK version too, being replaced with two British YouTubers. This is a weird as hell choice that might go a bit to explaining why the comic relief characters may as well not be a part of this film. Same with Boomer who, in the UK version, is voiced by Tom Baker. When a voice actor is so interchangeable that you can replace them this casually without the excuse of “Translation to another language”, we have a problem with characterisation. None of these characters feels like they’re actual characters, they’re a series of concepts strung together and voiced by actors on a lunch break. Literally, the only voice actor who managed to make their character feel in any way interesting was John Oliver and only because hearing John Oliver in a high pitched voice is hilarious, and basically half the comic value of Last Week Tonight. 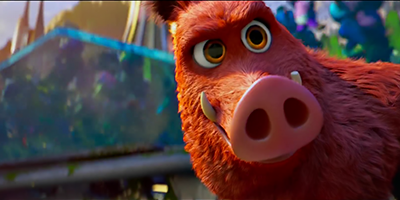 The voice acting isn’t the only problem here, although it certainly doesn’t help matters. When you break this story down to its central theme, it’s a story about a girl trying to cope with the loss of her mother and the associated depression that would cause. The idea of taking an internal struggle of emotions and turning it into an animated comedy isn’t just a really good idea, it’s literally the foundation of Inside Out which is the best-animated movie of the last decade and I will literally fight you on this. This is an idea that really should work better than it does, we should be able to use the park as a grand metaphor for a girl coming to terms with the potential loss of her mother but we don’t get that. We get Chimpanzombies (which is a concept that should be hilarious but isn’t) and a by-the-numbers “You’re special, you can save everything” plot that is so often associated with these kinds of films but never gives us any reason to care. They don’t give us any good jokes, any emotional gravitas, nothing whatsoever worth latching onto. 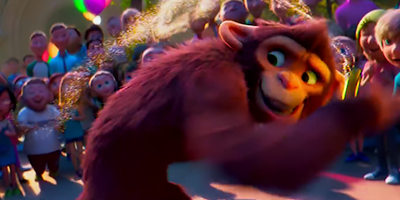 When you go to see animated family films with small children, what you will inevitably notice is that things that don’t amuse an adult will get a huge laugh out of children. I’ve been in audiences for The Emoji Movie that was full of kids and I heard them laugh at every joke. They were not good jokes, that was not a good movie, but they were children who really didn’t need that much to be entertained and so that movie did it. I saw this movie with a comparably large crowd of children who were there willingly with their family and I swear to god you could’ve heard a pin drop. Nothing, nada, zilch. John Oliver saying “Skippy to safety, skippy to safety, tra-la-tra-la-la” god a little tiny laugh out of me and maybe a few small kids but that cinema was silent. That’s not a good sign for how a film is working because if you can’t make an audience of children laugh at your animated film, just what the hell have you done wrong here? 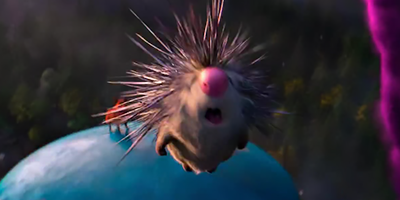 The giant metaphor for depression that this film revolves around just doesn’t work. The entire reason that the park is in trouble is because of a big black cloud hanging overhead called “The Darkness”. That metaphor is about as subtle as a two-by-four that’s inserted up one’s anus without lubrication, it’s not even a little bit subtle and the film is clearly trying to be about how a child deals with depression and they have no idea how to handle it. None, they just don’t get what they’re doing. They kind of get something interesting about it right near the end but for the most part, it’s just a bad overdone attempt at importance and doesn’t make it work. It’s a bad metaphor set in a movie full of them. It’s not like this should’ve been hard to make something interesting out of. You have a giant depression metaphor in a place called Wonderland… and you don’t think to do a dark twisted theme park version of the public domain story Alice in Wonderland? Really? That was beyond you? Also, why is the film called Wonder Park when the location in the film is Wonderland… other than the obvious attempt to have a copyrightable title that you can plaster on the merchandise you’re so sure you’re going to be able to sell.

Animation wise, I’ve seen worse (after Flying the Nest, I don’t think it’s possible for me to think of any animation as truly awful anymore) but everything is just so average looking. It’s a bunch of animals that make noises and flail about. There’s nothing impressive about it, its standard children’s movie animation that has exactly one cool shot in it (the scene in the trailer where she first stumbles upon Wonderland) and the rest is just average, if we’re kind. I can’t even be mad about how it looks, it looks fine but I could see fine animation with a better story somewhere else. If you’re going to give me basic animation, at least give me something interesting to work with.

This film has problems, problems that go beyond having to fire the director a year before release because of complaints about “inappropriate and unwanted conduct”. The problem is that there’s just nothing interesting here, it’s designed to be a mess of colours that you can put your kids in front of for a few hours to distract them. It’s a movie that exists, nothing more. There’s absolutely nothing special about this, either particularly good or particularly bad. If this film didn’t exist, no one would care either way. It’s a net zero for the cultural landscape; it’s a film that will be forgotten before the car ride home ends. Take your kids to The Lego Movie 2 instead; at least that one has something memorable about it worth watching. Children deserve better films than this; they deserve films with actual care and passion put into them and not this cheap nasty crap that’s put out to grab eyeballs and nothing else. Competently made, sure, but it’s got nothing of substance behind that competence.