When I was picking what film to go see this week, I put a poll up on my twitter account to ask what to see out of the multiple options available at my local cinema. The movies available to choose from were On The Basis Of Sex, Cold Pursuit and Ben Is Back. By the end of the poll, it was a tie between Cold Pursuit and Ben Is Back. A randomiser then picked the winner, so it’s not my fault that I went to see Cold Pursuit, it was fate… horrible, horrible fate

Cold Pursuit follows Nels Coxman (Liam Neeson), a snowplow driver working in a little remote town where nothing ever happens except for a thriving cocaine trade that his son Kyle (Micheal Richardson) accidentally gets caught up in. When I say ‘get caught up in’ I, of course, mean in the way that ends up with Kyle dead and Nels wanting revenge, because this is a Liam Neeson movie and that’s how those always go nowadays. In his thirst for revenge, Nels could lose everything, his wife, family, possibly his plow, but he will also soon discover that going on a trip with murderous revenge in mind can be a laugh riot. 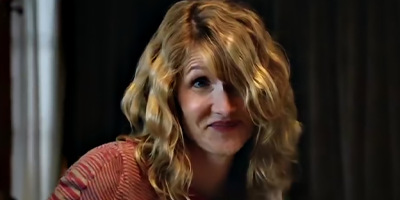 Fun fact, I didn’t know when  I walked into this movie that it was a remake of a film called In Order Of Disappearance, which is an oversight on my part and I will endeavour to not let that happen again (even though, as I’ve said before, I shouldn’t need supplemental material in order to make a film make sense). The original film is a black comedy and you can tell that this film is clearly trying to do that too, but for me it never felt like I was laughing with the film. Maybe it’s an intentional style choice that doesn’t work for me, but so much of this felt less like a black comedy and more like an accidental parody of Liam’s previous work that my laughter was filled with derision at what was being presented on the screen as a film. When I walk out of a film and am unsure what genre it was meant to be part of, that concerns me.

The acting is beyond phoned in; it’s texted in on a prepaid phone that was made in 1997. This is a film performance that Liam Neeson described using language that basically made him into an internet pariah and forced him to cancel a lot of press for this film… and I’m not even sure if he’s in half of the film. He’s there physically but he certainly doesn’t seem engaged. If this is the performance he gives after thinking about a friend who was raped and how he felt after that… I mean just goddamn, there is nothing there worth watching. Laura Dern has a few scenes and either she was distracted by preparing for season 2 of Big Little Lies or she read the script and realised it was bad because there was nothing good about her performance, which shouldn’t be possible because it’s Laura goddamn Dern. The bad guy in this movie, Tom Bateman, is the only one who seems to be having any sort of fun because he’s chewing scenery and having a blast, which is good because someone involved in the viewing of this film should be having fun.

For the life of me, I couldn’t get a handle on what tone this film was going for. Is it a dark comedy? Absurdist humour? Slapstick? Bad? Bad! Let’s go with bad and inconsistent. I’m not saying that you can’t jump between styles of comedy, some of the best comedies of all time do that but there’s gracefully going from style to style and then there’s just throwing everything at the wall and hoping something sticks. We don’t even get any fun over the top moments like the snow plow being used to kill anyone, it’s all bare hands and guns and that’s it. There’s maybe one moment where it’s hinted that the snow plow might be used to run someone off the road but it never goes there, it’s an afterthought and it lands with a thud.

The editing is so shockingly awful that there were several moments when I wondered if I passed out and just missed a few seconds of film, but nope they just edited it in a blender and thought that would work. It’s hard to describe how bad some of the edits are in text form, but they’re genuinely just hard to watch at times. On top of bad editing, the film thinks it’s artsy and so it decides that every time a character dies that we need to cut to a title card with a symbol representing the person’s religion (which for one person is the peace symbol, because peace is a religion?), their name and their random nickname that literally every character in this film has and it’s apparently meant to be a motif? It’s a bad choice that baffled me.

It’s hard to deny that I laughed during the watching of this film and since it’s a remake of a black comedy that should mean that it’s good right? Well, not really. Sure, I laughed but it never felt like it was laughter brought on because of a good joke or because they did something truly clever. I was laughing at the bad performances, at the poor choices in framing, at weird lines of dialogue that felt less like jokes and more like bad writing. This feels like a bad film that is being repackaged as a comedy, kind of like The Room except not nearly as interesting. I just don’t think it’s a good film, I’ve tried to justify it as an intentional comedy that I just didn’t like but after a while, intentionally trying to look like a bad actor is just being a bad actor. I walked out of this film wondering if Liam didn’t tell that story that created all the controversy to intentionally force a boycott so no one would see this film. The more I think about it, the more that I wonder if maybe it’s just me not liking it and I’m the only one here… but this is my blog, my review, and I didn’t like it because it felt so poorly thought out and doesn’t live up to any of its potential.