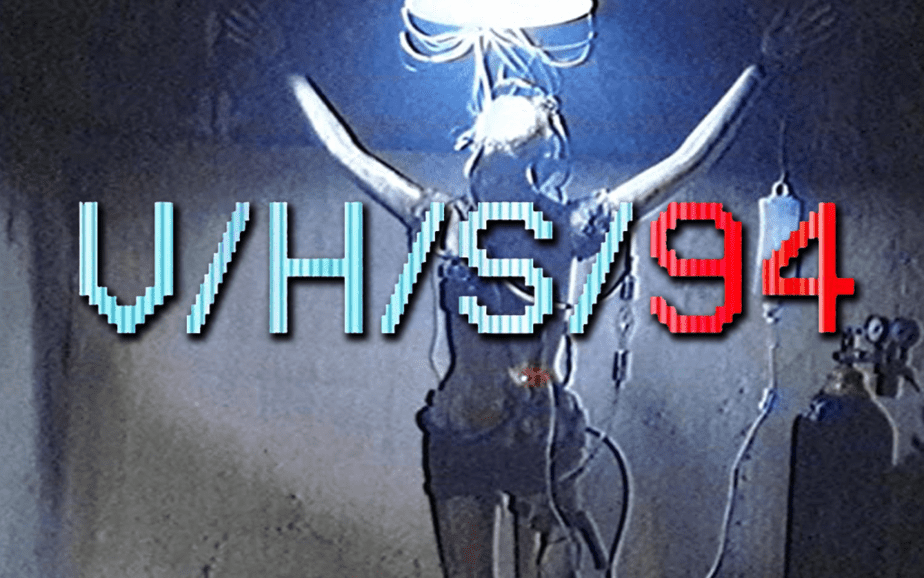 NOTE: Here is my review from Soda & Telepaths that was posted back on October 29, 2021

V/H/S/94 is the fourth movie in the V/H/S franchise that’s been going strong since 2012. The premise behind the franchise, and indeed this specific entry, is very simple. A bunch of people happen upon a creepy building where there is a large collection of VHS tapes and on some of those tapes are a series of short horror stories that make up the bulk of the film.

For V/H/S/94 the people going into a creepy building is a SWAT team who are investigating what they believe to be a drug ring that turns out to be a VHS worshipping cult. Coincidentally, almost all the films shown on the assorted VHS tapes playing through the giant compound happen to relate in some way to cults or cultish behaviour.

Anthologies are hard to pull off because you not only need a good gimmick to link all the segments together but the film lives and dies based upon the strength of each of those segments. V/H/S as a franchise has been fairly hit or miss, but it also has produced some big-time talent that has helmed some major films, including the people behind Ready or Not, the upcoming Scream film and You’re Next.

V/H/S/94 feels like a great throwback to the video nasty. It works more often than it doesn’t with only one short in the entire bunch failing to scare (it’s also the only one that felt like it strayed the furthest from the Cult idea that fills most of the film).

The wraparound segment is called Holy Hell (directed by Jennifer Reeder) and as a piece on its own, it’s great at setting the mood. The complex that the SWAT team invades feels gigantic and the set design is upsettingly creepy. With a few well-placed mannequins and flickering screens, there’s this constant sense that there’s someone in this building who is ready to make things horrible for our main set of characters.

It builds slowly and effectively, the transitions from Holy Hell to the other shorts that make up V/H/S/94 feel natural. The ending is a little out of left field and is not as clever as, say, Tape 56 from the original V/H/S which used the wrap-around segments to really set up the shocker ending. Still, it gets the job done.

The first segment is called Storm Drain (Directed by Chloe Okuno) is a dark tension-filled piece about a news reporter named Holly (Anna Hopkins) doing a story on the Rat Man, a local folklore story. She interviews a couple of town weirdos which unnerves her greatly. While finishing up the story at the mouth of the storm drain, which is allegedly where Rat Man lives, our intrepid reporter spots a couple of homeless people and decides to change her story by seeing how many people live in this storm drain.

What follows is possibly the tensest segment in the entire film, chock full of shots that have you looking in the background to see if anything is moving around. The sound design is wonderful at setting the mood, in this case, the mood being ‘Pants-shitting terror’. Finally, the ending is so disgustingly brilliant that it will have you trying to decide between screaming or laughing at the extremity of it all… plus it’s very reminiscent of the best Russell Edgington moment in True Blood which means I’m destined to love it.

The next segment, The Empty Wake (Directed by Simon Barrett), is the slowest segment of the film but has a glorious payoff at the end. Taking place at a funeral home, Hayley (Kyal Legend) has been told to stay and handle a late-night wake. For most of the night no one turns up, possibly due to the thunderstorm going on but that doesn’t stop there being creepy sounds and weird goings-on. Eventually, one guy does turn up, only to mumble some strange words and leave before all hell breaks loose.

While this one seems to revel in silence for most of the runtime, once we hit the second blackout this short plays its hand and reveals the subgenre of horror film we’ve been watching for the entire short. Without spoiling what the reveal is, however the hell they made the character of Andrew Edwards look the way he looks in this is nothing short of visual effects genius.

The next segment, The Subject (Directed by Timo Tjahjanto), is the one short I had problems getting into. It follows a mad scientist (Budi Ross) who is doing some horrific experiments on a pair of people to combine man with machine. One of them he combines with a video camera and the other one he turns into basically a knock off Resident Evil villain. While this one has got some great visceral imagery, imaginative designs and more than a few “what the fuck did I just see?” moments, it just doesn’t work in this context.

For starters, it really goes against the cult idea that every other short at least has some kind of nod towards. It also doesn’t feel like a strangely edited VHS tape like all the other shorts do, it feels more like a knockoff Outlast that we only get to watch play itself. Throw in CGI that stands out really badly because they didn’t apply the normal grainy VHS filter that hides most of the flaws in these films and it just doesn’t work.

The final short, Terror (Directed by Ryan Prows), is sadly perfect for 2021 because it involves an armed militia planning to invade a government building. Yep, we’re deep in with a group of fascists who think their country has been taken from them so they want to take it back by using a ‘creature’ that they can let run through the halls of a government building and wreak havoc on everyone inside.

If you told me that they started writing this on Jan 7th, 2021 and just had the fastest shooting schedule known to man, I would believe it because this feels like someone looked at the insurrection and went “How can I make those idiots look dumber?” – and it succeeds. Equal parts scary and hilarious, it plays up the idea that all these militias and white supremacist groups are really stupid and should be mocked or possibly eaten by creatures that we cannot properly describe.

On the whole, V/H/S/94 is a fairly fun time, probably one of the best entries in this franchise. Most of the shorts are really good and there’s just something about that old grainy VHS style that works wonderfully to make some effective horror. While V/H/S: Viral almost killed the love for this series, V/H/S/94 proves that there’s still a lot of life left in this idea and hopefully we can get a few more creepy tapes in the not-to-distant future.

V/H/S/94 is available on Shudder