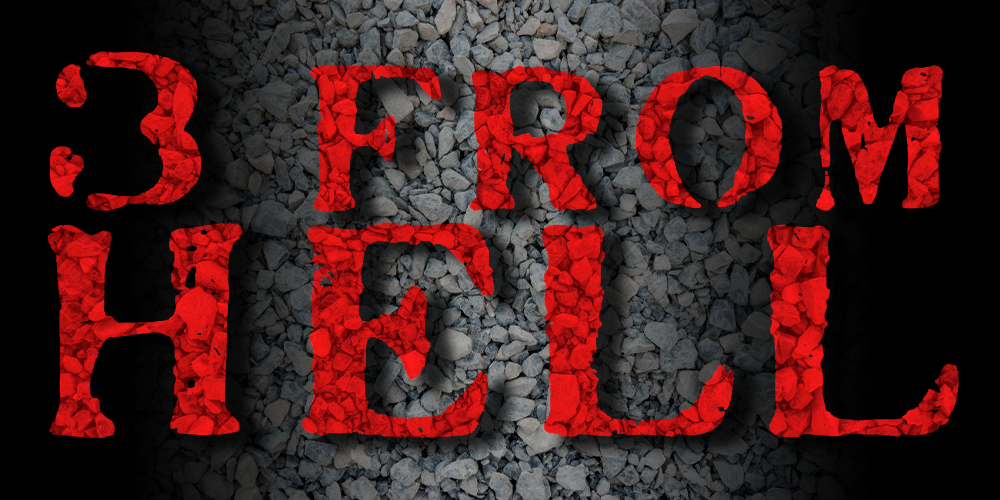 Rob Zombie is probably one of the most fascinating people working in horror today. Even if you don’t like his films, he’s got a style that is unmistakably his own that he manages to maintain in every film, no matter what the film is about. Even the two Halloween remakes he did are so obviously Rob Zombie films, he has such a distinctive style and tone that you either love him or hate him. I tend to bounce between love and hate for each of his movies. I enjoyed House of 1000 Corpses and The Devil’s Rejects, thought 31 had a good idea but a middling execution and the rest are just different kinds of bad. Unique, but bad. So when I heard there was another film in the series that began with House of 1000 Corpses I was excited, it’s the one set of movies that Rob has done that I’ve kind of enjoyed every single time he’s come back to the adventures of the Firefly family. I was so ready for this one to be a fun little trip, I found it screening at a local horror film festival (I saw three other films, I’ll talk about them in the coming days) so I bought myself a ticket and I sat down… and spent the next two hours alternating between boredom and annoyance.

3 From Hell picks up where The Devil’s Rejects left off… with the three rejects full of bullets and needing emergency surgeries to save their lives. Each one was shot around 20 times each but somehow survived (despite all of them being so universally hated that if the cops shot them all in the head, no one would object) and are all sentenced to prison. Captain Spaulding (Sid Haig) and Oris Driftwood (Bill Moseley) get the death penalty while Baby (Sheri Moon Zombie) gets life in prison with the possibility for parole because of reasons. After Captain Spaulding is put to death by lethal injection, Otis is put on a chain gang for a work program (Which is a thing that is done with death row inmates??) and ends up being broken out of jail by his half-brother Winslow Foxworth Coltrane (Richard Brake), in the process accidentally killing a man named Rondo (Danny Trejo) which will be important to the climax of the film. Otis and Winslow then work together to break Baby out of jail and begin a cross country drive that ends with them seeking refuge in Mexico where even more plot-adjacent horrors can happen.

So this is another case of a film no one was asking for because the ending of the last one was so perfect. The Devil’s Rejects was insane and over the top in its disturbing brutality but that final shot of the titular rejects accepting their fate and going out in a blaze of glory, firing on the cops who were shooting at them, is a glorious image that puts a cap on the story of this murderous family. Yes, shooting a horror movie villain isn’t typically a great way to kill them but this time it was pretty damn definitive that they were dead so there was no need to bring them back… except that Zombie hasn’t made a film that’s been a hit since Halloween 2 and doing a sequel to one of his most successful and popular films was basically a sure thing. This is the only reason I can see why he would make this one, it’s certainly not because he had a terrific story that needed to be told or something unique to offer the genre. Say what you will about The Devil’s Rejects or House of 1000 Corpses, those two films are unique as hell, they barely even look like each other and showed a huge leap in quality. 3 From Hell feels like a cheap version of The Devil’s Rejects that was done by memory from someone who saw The Devil’s Rejects once back in 2005.

To be positive about this film for exactly one paragraph, Sid Haig’s performance is objectively the greatest part of this film. This is the last of Sid’s films that was released during his lifetime and the last thing he ever did, and it’s one of his greatest performances. For full context, according to Rob Zombie, Sid knew he was dying and this was the last thing he’d do. They couldn’t even get a doctor to clear him and had to rewrite the movie to justify getting Spaulding out of the film… but god damn if he didn’t find a way to tap dance around every other actor in the film. He has one scene where he is sitting and talking and we know now that he probably shouldn’t have been doing that but it’s an intense monologue that shocks the audience into submission. Part of the power does come from knowing that this was Sid’s last performance, it’s a great performance that only lasts two minutes but sticks with you for much longer… here endeth the positives.

Everything else just feels wrong, it doesn’t work. While we can accept that they had to rewrite the script to accommodate suddenly being unable to use one of their main actors, Winslow is a bad replacement. He’s so clearly just an uninteresting version of Spaulding that it’s sometimes comical how obvious it was that they just did a find and replace… specifically, a scene where a birthday clown shows up during one of the Firefly families ‘parties’ and you can almost see that it was meant to be a moment for Spaulding, but it doesn’t work now with Winslow. The character just isn’t as interesting, he has no quirks or anything, he’s a hired gun that swears and that’s it… which is shocking to say about Richard Brake who was the best part of Zombie’s previous film 31. Baby and Otis are fine, though Baby does go from being completely batshit crazy to just a little kooky with no real transition between them, but neither of them does anything memorable. When all three other bad guys are outshone by a two-minute-long scene of Captain Spaulding sitting and talking that says a lot about how low we’ve gotten.

The horror element of 3 From Hell just doesn’t work. They certainly try, the start has a good atmosphere and maybe if the entire movie was set in the prison or something then maybe they could’ve had something interesting. There’s just nothing there, certainly nothing that matches the brutality of the first two movies. The first two movies made it clear how these guys were insane and brutal and would do demented things simply because it was fun. They were obscene and that was the point, they were bad because they delighted in torture and making sure everyone who came their way suffered until the last second. Here? There was a lot of shooting death, Baby does some stuff with a bow and arrow at one point but that’s it. There’s nothing here that’s even particularly memorable or shocking, everything kind of happens as though we’re meant to be shocked. We’re even invited to root for the three bad guys but there’s no real reason to, unlike in The Devil’s Rejects where they at least put them up against a Sheriff who was easy to hate. Everything that made The Devil’s Rejects work so well is just gone here, it might keep the gritty aesthetic style but it lost all of the actual power behind the film.

3 From Hell is an unwanted and unneeded sequel that doesn’t offer anything new or exciting. Its performances are fine and the effects work is acceptable but other than the powerhouse of Sid Haig’s final performance, there’s nothing here worth recommending. I keep finding myself just waiting patiently for Rob Zombie to wow me with a film that shows me why he’s doing this as a career. It feels like he stopped growing as a filmmaker when he did The Devil’s Rejects, that’s the aesthetic he’s going to maintain for the rest of his career but he’s never going to do it as well as he did it back in 2005. I just want to like his films more and if 3 From Hell is any indication, that’ll probably happen when this movie freezes over.