In 2014, the New York Times printed an article titled “The Sinaloa Cartels 90-year-old Drug Mule” about a man named Leo Sharp who spent around a decade as one of the biggest drug runners for El Chapo. Dubbed Tata (The Grandfather), Leo would drive around the country in an old truck with hundreds of pounds of cocaine in the back. He’d go undetected due to his age, his clean record and by how fragile he could appear. The article itself is a fascinating read, exploring just how a senior citizen could go from being a veteran to transporting potentially thousands of kilos of cocaine. It’s a tale that seems tailor-made to be a movie and I guess Clint Eastwood thought that too because now we get a film about the 90-year-old drug mule and honestly, it’s not that bad.

The Mule follows our Leo Sharp stand-in, Earl Stone (Clint Eastwood), a man who is suffering from not only a huge financial burden that threatens to leave him homeless, but he’s completely disconnected from his family who haves basically cut him out of their lives because he was never there when they needed him. In a moment of desperation, Earl becomes a drug mule and tries to use that money to put everything in order. He runs drugs to buy his home back, to fix the VFW (A veterans hangout), to pay for his granddaughter’s wedding. He does everything that he can to try and fix the relationships he’s broken… all while DEA Agent Colin Bates (Bradley Cooper) is trying to find out just where all the drugs are coming from and will somehow find a way to track down whoever is bringing them in.

The changes from the original article give this film a new dramatic weight. The article never mentions the family of the mule so we can assume that’s a movie invention, and it’s what makes this movie exciting. We see him being isolated from everyone, not only his ex-wife but his child. We see him lose his home and be left with no other option other than to shove a few hundred pounds of cocaine in the back of his truck and drive across the country. Most of the movie really is just a performance class by Clint Eastwood who carries the film and shows everyone why he is the iconic performer that we all know and love. His performance is calm, relaxed and frail but there’s a power behind it. The man may be heading towards 90 but there are so many moments where a single look will tell you “Do not mess with this old man, he will end you” and I genuinely don’t know if that’s a conscious choice or if Clint just can’t help but look like that, but it works for this character who has to walk around with members of the cartel and look like he belongs there. He manages to make this old guy charming, even when he’s leaning into some moments of “I grew up in a time when Negro was the preferred terminology” you still get the sense that he is genuinely a good person but with a lot of excess baggage that ends up leading him to take this kind of a job. 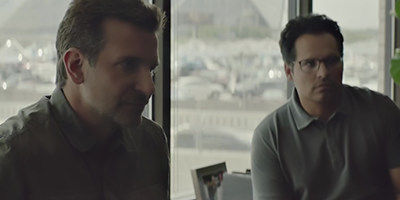 Some of the best scenes in this movie are when Clint gets to have little one on one moments with his side cast. A diner talk with Bradley Cooper provides a fascinating back and forth between a criminal and the man who is looking for him, brilliantly dramatic because we know that both characters are at odds with each other but neither of them knows it. A scene where the characters Ex-Wife Mary (Dianne Wiest) confronts him about his past not only lets Clint show just how vulnerable he can be but it’s a great moment for Dianne who shines in the few scenes she gets to show off here. It’s really a film meant to show off the actors which is really great because they got some of the best actors working today.

The film feels a lot longer than it is, for some reason the pacing is particularly slow and for some people that can work but it does make it a bit of a sit at times. The good part about how slowly it builds is that when it gets to the climax and we get to see the culmination of the previous several hours of film, it’s fairly satisfying but god does it feel like it takes so long to get there. Plus, once we get to that climax, it’s over in minutes and we barely get to revel in what we’ve built up to (And if you read the article, there’s a lot that could be done in that last few moments). Indeed the climax of this film is very different to what’s described in the article, so you can read that without being spoiled, but I kind of prefer how the story ended in the original article.

After last year’s abomination 15:17 to Paris (One of the worst films of 2018, as voted on by me), I was sincerely worried that maybe Clint had lost his spark as a director but The Mule fixed that feeling up in no time. No longer will I worry about the man’s talent, a bump in the road cannot detract from just how talented he is. It’s a really good film, it’s long and you might want some caffeine while you watch it, but it’s really a good solid film worthy of your time.