I’ve previously talked on this blog about how nervous I get walking into DC films. After their attempt at an expanded universe netted exactly one good film (Wonder Woman, for the record) and got them a resounding box office failure with their massive team-up film… let’s just say that I get nervous when I walk into these things. Then Aquaman happened and it was above any expectation. I dare say that I should’ve probably given it an even 4 out of 5 now that I look back on it because it was a genuinely fun playful movie that understood that the material was not meant to be dark and so it didn’t bother being pointlessly grim. With the advertisements for Shazam! I was admittedly a little more excited, there was a brighter tone that excited me and made me hopeful that they were going to get this right… oh my god, oh my god you guys!

Shazam! Follows Billy Batson (Asher Angel), a foster child with a history of running away from the homes that he’s been placed in. He keeps running away because he is desperately trying to find his mother who he hasn’t seen since he lost her at a carnival when he was four. With one last chance, Billy gets put into one big group home where he rooms with Frederick Freeman (Jack Dylan Grazer), a disabled nerd with a love of superheroes (specifically DC ones, for some weird reason). One day, after defending Fred from a pair of bullies, Billy gets magically transported to the Rock of Eternity where he is confronted by a wizard (Djimon Hounsou) who tells Billy that there were 7 deadly sins trapped in stone, until a man called Thaddeus Sivana (Mark Strong) came and unleashed them, taking on their powers for his own personal gain. Now the wizard has charged Billy with taking on the wizards powers so that he can fight the sins himself but first, Billy only needs to say the wizard’s name… SHAZAM! (Zachary Levi).

Let’s just get this out of the way; this is the best DC movie since Wonder Woman. It’s not even a contest; I will not entertain a discussion on this. I can’t be swayed in any direction; this is everything I was hoping it would be and then about 50 other things on top of that. Everything about this works, every single solitary thing about this film works. The plot for Billy being about trying to find his family is a tried and tested idea and they go for it. From the moment they set the back story up and let us know how Billy lost his mother we have a sincere emotional investment in him trying to find her and understand why he’s having trouble connecting to his new family, complete with five new siblings and two parents who he just can’t connect with. This ends up creating his character arc for the entire movie and witnessing him slowly learn about what family can mean actually pulls on the heartstrings because the character is well portrayed and his storyline is relatable. 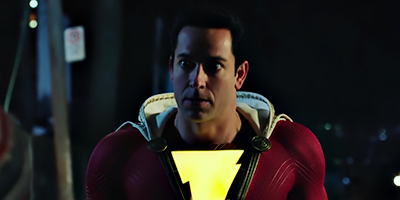 In fact, the entire movie has a lot of relatability going for it. Every one of the foster kids that make up the family that Billy is having so much trouble connecting with are intriguing and cover a broad spectrum of representation, including some gay representation that is in the subtext of one of the characters (he walks out of a strip club filled with naked women going “Not my thing”, I’m just going to call that one because it’s literally the best that I’ve gotten out of one of these movies, let me have this) so it’s kind of impressive how they basically let everyone be a part of the fun here. It also helps sell the key idea that family is whatever you want it to be, not what you were born into. The kids who play the main family work wonderfully together and create some of the best moments in a film that is basically completely created out of best moments. 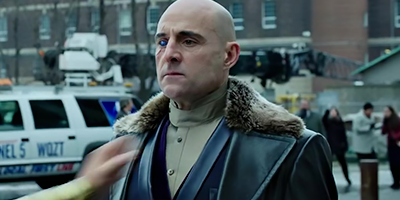 While there are a ton of joyful fun moments (montage of figuring out superpowers set to Don’t Stop Me Now by Queen… tell me that doesn’t sound amazing) there’s also a lot of heavy stuff here. We’re dealing with stories of kids who have been neglected and abandoned, the hero is a child who has spent years trying to find his long lost mother while the villain is someone who knew his father his entire life and was constantly emotionally abused by him. Both of these characters are faced with traumatic childhoods that we actually have to deal with throughout the film and see how the two of them handle their traumas and how they grow because of that. It’s a mixture of light and dark that DC films have always had problems with, but here they got the mix exactly right. They play the emotion when it’s time to play the emotion, and they go for the laugh when they want you to relax a little. By the end of the movie, it’s still a ton of fun but the jokes slowly start falling away while they actively confront the harsh reality of what happened.

The end sequence might be the best end sequence of any DC film. Hell, I would probably put it up there with several Marvel movies as well because it’s powerful, emotional, has some great action set pieces and jokes. There are moments that you will remember just because they pack such a punch, it’s basically taking the chance to do something massive and doing every single thing they could think of. Do not hit up Wikipedia or IMDB before you see this one because trust me, they do a thing in the final scene that is genuinely amazing and made me choke up a little. It’s the kind of moment that we will talk about for years because it’s that awesome and impactful, not only to the story but to the genre in general. It’s the kind of moment that’s insanely hard to describe without giving away anything so when you see it, you’ll undoubtedly know what I mean because it basically leads to the bulk of the final fight and it’s awesome as hell.

Shazam! is DC running on full, it’s a pure action-packed juggernaut with a ton of heart to help it along the way. Hilarious at times, heartbreaking at others, it’s everything you could hope for and then some. It’s a bright spot in the superhero genre that makes it clear why DC released it between two massive Marvel movies… because they knew they had something special on their hands. This film is incredible, it’s awesome, I loved every single solitary second of it and I want to see it again because I want to experience that joy again. It’s a pleasure to see how well this turned out; I’m eagerly awaiting the sequel that had better goddamn happen. I don’t care if they canned the DCEU, I want more Shazam! damnit.

There are 2 end credits scenes. One in the mid-credits which is basically sequel bait (Please let them go with that bait… please please please please please) and the one after all the credits is a lot more comedic, but it’s also adorable and by this point if you aren’t sitting through the credits of superhero films, I have no idea what to do with you. 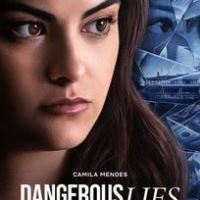